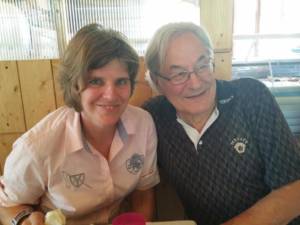 Let’s learn more about Vivianne and Valter, the owners of L’Arca di Noè Agricamp and Agrigarden and learn about their activity.

Vivianne and Valter met in Zurich in the early 1990s and got married a few years later. In 1996 the love for animals and nature brought them to Italy, close to where Valter had spent his childhood in Reggio Emilia.
After the first six months in Sant’Ilario d’Enza (RE) they moved to Gombola di Polinago (MO). Here they bought a home, land and a pasture. Together with them they moved Urvald and Letizia their horses, which in the new home had not only more space, but also more friends. In fact, the family has increasingly expanded to include horses, donkeys, goats, geese, ducks, hens, dogs, cats and even two turtles and an emu (Australian ostrich).
Their first activity was, selling plants and flowers, which in a short time became the Agrigarden Store, with an increasingly larger assortment.
In 2011, thanks to the support provided by the Local Action Plans (PAL) of the Local Action Group (GAL), Vivianne and Valter decided to create a photovoltaic system integrating it in a large modern wood barn.
Once the barn was built the Agristore was opened and shortly after, the camping site was born.

The barn was then enriched and equipped with services, the surrounding area was prepared in order to set up pitches and in 2013 the first guests where accommodated: guest with campers or in tents and even non-equipped guests that would rent a caravan on the campground.

The mobile home arrived in 2016, while in 2017 the swimming pool and the second caravan arrived.
Vivianne and Valter, in addition to animals and nature, deeply love the surrounding land. For them the activity is not only a source of income, but also an enrichment for the whole community in which they live. In fact, they have always sought to enhance the beauties and the local culture, not only by becoming promoters with its customers, but also by organizing events for the community and by making sure that their Agricamp is a point of reference for all, tourists and non, all year round.